10 Luxurious Travel Destinations to Help You Relax in Style.

These destinations are some of the most luxurious in the world. If you have the means to travel in style, these destinations will make it worth the extra cost. Whether it’s a secluded beach resort located next to a sandy beach, or a luxury hotel in the middle of a bustling city, we have a destination for everyone. 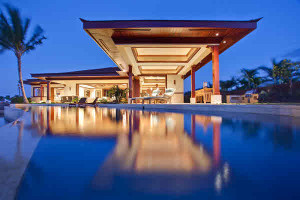 The Big Island is the newest Hawaiian Island…it’s so new that it’s still volcanically active. It’s the biggest Hawaiian island (hence the name ‘Big Island’) and yet it’s sparsely populated. If you want to truly get away, this is one of the best places on Earth.
But that doesn’t mean you need to give up your creature comforts. There are several luxury resorts on the Island that offer world-class service on this remote island. Several resorts, such as the Four Seasons Hualalai Resort, offer 5 star service. With a famous golf course, several high end dining options, and a spa, you’ll be in the lap of luxury…in the middle of nowhere.
The best part of a resort like the Four Seasons is that you can hop in a jeep and go to one of several secluded sandy beaches where you’ll be entirely alone. If you drive south for 20 minutes you’ll be in Kona, a small town that has lots of local shops, along with Costco, Walmart and Macys.
The Four Seasons is also where Megan Fox got married in 2010. If its good enough for world famous celebrities, it’s good enough for you, right?

Click here to save on room bookings on your next trip to the Big Island. 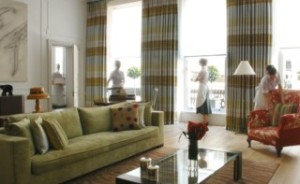 The “Kipling Suite” in Brown’s Hotel in London.

You knew that a list of ‘luxury’ destinations would involve Europe, didn’t you? London is known for being an expensive place to eat, sleep and eat. There’s a reason: the city has tons of centuries old attractions to make you feel that you’re going back in time.

For staying in London, you can go one of two routes: you can stay at a high end, modern hotel like The Metropolitan by Como, a new hotel located next to Hyde Park and the temporary home of world-travelling jet-setters. Or you can stay in the ‘old-money’ hotels: places like Brown’s. “The Jungle Book” author Rudyard Kipling stayed at Brown’s, and now they have a suite named after him. It’s the fusion of old-world charm and contemporary luxury. These older luxury hotels have the added advantage of having lots of history connected to them. You can hear the attendants and bartenders tell stories of great things that happened there.

The only downside is the food. And British coffee tastes….well, I understand why tea took over there.

The city itself is an architect’s dream. Looking like a future science fiction landscape, Dubai’s boasts one of the most distinctive skylines in the world. Not only that, but all the hotels are brand new, distinctive, and are competing for your attention. The ‘jewel’ of Dubai, as it were is the “Burj Al Arab”, which calls itself the ‘most luxurious hotel in the world”. What makes it the most luxurious? We could go into a list. But here’s an example of the services they offer: an optional chauffeur-drive Rolls Royce. 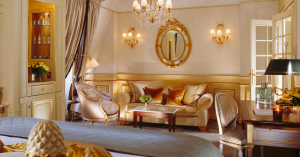 Aside from all of the United States combined, Paris is the most popular destination for tourists. Despite this, Paris manages to exude class, sophistication and luxury. The most ‘luxury’ of the luxury hotels has to be the Hotel Le Meurice.

Among the amenities of Le Meurice is a spa, soundproof rooms (hint, hint!), classic-decor, and a restaurant inspired by the “Salon de la Paix of the Château de Versailles”. The idea is that this hotel evokes the time of the great French aristocracy of the past. It’s also located next to some of the greatest buildings in world history. The Louvre museum is 600 metres away, and the Champs-Elysées is a five minute walk away.

Click here to read more about the Hotel Le Meurice. 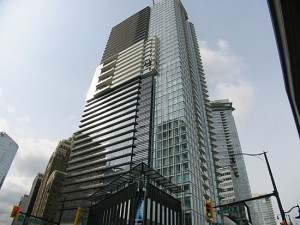 People are surprised to find that Vancouver is the fourth most visited city in the world, just behind Paris, London, New York and Los Angeles. The large Chinese-born population (approximately 33% of the population) makes this city a popular destination for Asian tourists as well as North Americans and Europeans. The city has a strong ‘Asia-Pacific’ feel to it in its architecture. High-end travellers have no shortage of activities here.

Vancouver gets a bad rap because of the rainy winter months. But in the spring, summer and early autumn that rain translates into a lush, green city that’s among the most beautiful in the world. And if you do happen to visit in the winter, then the Whistler ski slopes are just over an hour away.

The Vancouver airport is frequently voted as one of the most beautiful. Hotels like the Fairmont Pacific Rim and River Rock are sleek, modern and have every amenity you can imagine. Seaplane tours are a great way to view the Rocky mountain ranges, and there is no shortage of hikes and other outdoorsy activities that get you closer to nature.

Click here to see the Fairmont Pacific Rim in Vancouver. 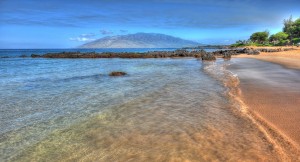 When travelling with young ones, there are a few extra considerations when choosing which beach to visit. Firstly, you want a beach with a calm surf, easy access to restrooms, lifeguards, clean water and shower stations.
Each Hawaiian island has dozens of beautiful white sand beaches, but factors like rough surf, jagged lava rock and deep water means that not every beach there is 100% friendly for every member of the family. And since families tend to be on tight budgets, please enjoy this website’s promotional offers to help you save some money on your trip to Hawaii.

Here they are, broken down by each island:

This is one of three Beach Parks alongside the small town of Kihei. The island of Lanai protects the area from any rough surf. If you’re staying in Kihei then it’s a quick 2 minute walk to the Beach, which is convenient. Lots of tour groups offer stand up paddle and kayak lessons in the area because it is so calm. The white sand beach is soft, there are lots of restroom and shower stations to rinse off after a dip.
There is a little bit of snorkeling for you and the older kids, although there are better places on the island if you want the good stuff.

Warning: Beware the trade winds. At around 12pm the trade winds pick up and don’t calm down until around 3pm. The sand blasting in your face isn’t pleasant, so try and get to the beach early (it gets really hot by 9pm in Kihei) and try to finish up by 11:30pm. 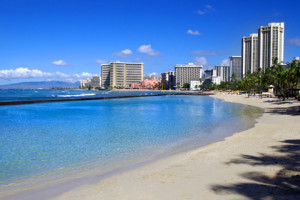 It’s a cliche, but you can’t beat the amenities: lots of restrooms, close parking, white sandy beaches and lifeguards on duty at all times. There are waves, but you have to go pretty far out to start feeling them. If your young ones stay at the shore, they’ll have a great time building sand castles and splashing around.
There is also a nearby zoo within walking distance for the kids.

Tip: if there’s anything to worry about at Waikiki Beach, it would be theft. It’s a very busy location with lots of people coming and going. So make sure you keep you valuables locked up (preferably in your car or hotel room). 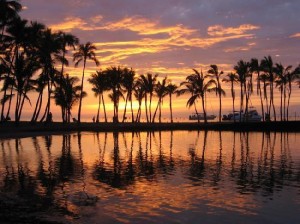 Don’t try to pronounce it. The Bay is world famous for its palm-beach sunsets (most tropical sunsets you see are of this place). Located about one hour north of Kona, Anaehoomalu Beach is a long, sandy beach with lots of courtesy beach chairs already laid out (courtesy of the Marriot hotel next door). There are restrooms, shower stations, and concession stands to get shaved ice. There’s also a very historic fish pond that the kids would defiinitely get a kick out of.